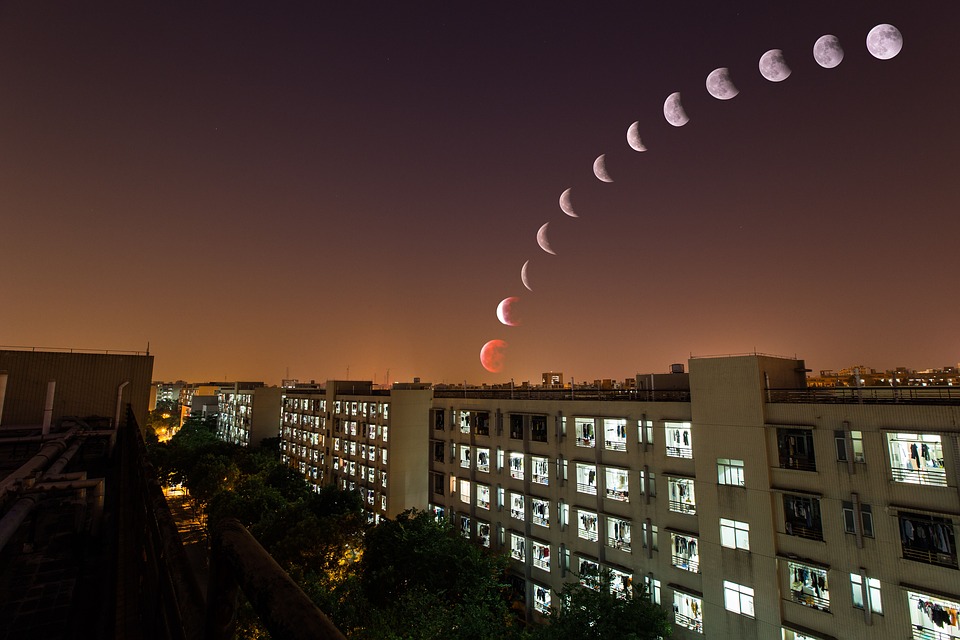 The July 16, 2019 lunar eclipse is a partial lunar eclipse and visible in many parts of the world. This full Moon is known as Ashadha Purnima in Vedic astrology or Jyotish.   Quite notably, the full Moon falls on the auspicious day of Guru Purnima 2019.  Heed the advice of your spiritual teacher on this eclipse.

Jyotish translates as “Vedic astrology and astronomy”.  Astrology is based on the movement of planets across the zodiac. This includes tracking new and full Moons. Astrologers interpret the meaning of  planetary transits. Astronomy maps the position of the planets at any given time. These details are then overlaid with the placement of the planets in an individual’s birth chart. 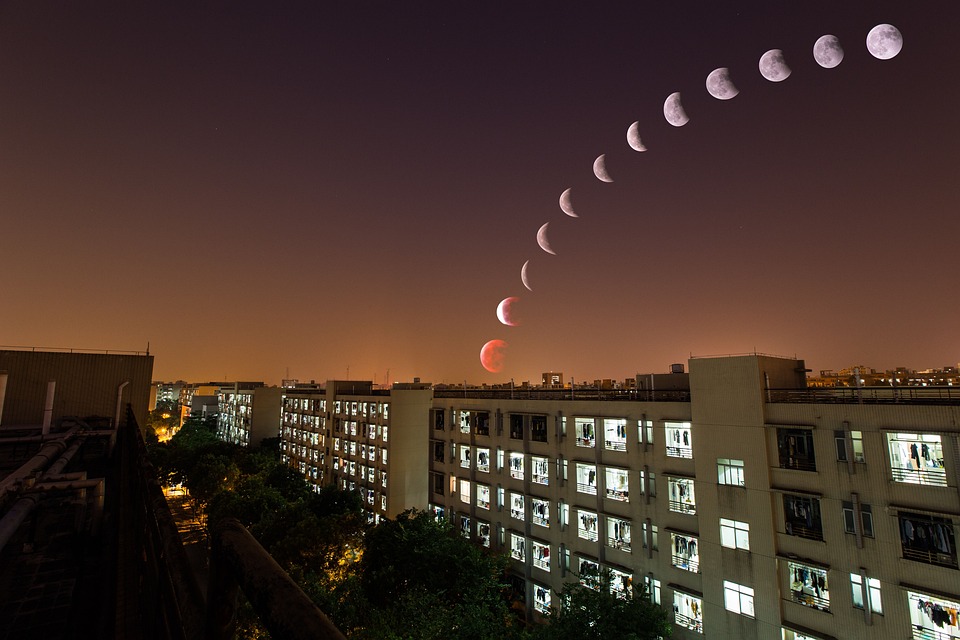 In close proximity to the full Moon will be South node Ketu and a retrograde Saturn. The Sun, Venus, and North node Rahu will be in Gemini – opposite the Moon. Thus, we have 6 of the 9 planets in Vedic astrology opposing and influencing each other during this eclipse. Retrogression brings planets closer to the earth and heightens their impact on the world.  Currently, Saturn and Mercury are retrograde.  Yet, in an eclipse, a luminary (the Moon here) is obstructed from our view. It does not allow use to have proper perspective.  As is commonly known in the astrological community, Donald Trump was born on a eclipse. The planetary combinations for the July 16, 2019 lunar eclipse brings together conflicting powerful energies. The full Moon heightens emotions, but then, it is not empowered to express them, given that South node Ketu is obstructing it. This dynamic can create inner tension, outer turmoil, aggression, and natural disasters. That is why we follow specific practices during eclipses.

The eclipse is in the star of Uttara Ashadha at the end of Sagittarius. Both the Sun and Moon are about to change signs. These junctures are known as sandhi and are very suitable for meditation.

Saturn and Ketu will be in the neighboring nakshatra of Purva Ashadha. This star has been connoted with recent water related disasters. Thus, we can expect more flooding and storms around the time of the eclipse.

Typically, Vedic astrology advises that eclipses are times for inwardly directed activity and not for gazing at the Sun or Moon. A lunar eclipse is known as a Chandra grahan in Hindi.  It’s best for you stay to inside. Don’t start new undertakings within 3 days of the July 16, 2019 lunar eclipse.

While many people in the Western hemisphere intentionally view eclipses, this is never recommended in the tradition of Vedic astrology. Those who do look at them may suffer from greater difficulty in the future.  The mythology related to the nodes, Rahu and Ketu, can help explain why eclipses are considered as inauspicious events. What follows is a very simplified version of the tale of the nodes.

The nodes were initially embodied as demons who desired eternal life. One demon heard of a private gathering where the Gods were imbibing amrita, the nectar of immortality. He so desired to join the party that he donned a disguise, gained admittance, and took a seat at the table. The amrita was passed around. The demon tasted it, squealed with delight, but was then discovered by the Sun and the Moon, who were seated on either side of him. Lord Vishnu threw his discus (chakra) and chopped the demon into two halves: the head (Rahu) and the tail (Ketu). Having tasted the nectar of immortality, Rahu is forever questing aimlessly for that elixir and is never satiated. Ketu is constantly trying to stay grounded, but lacks the ability to perceive. The nodes are also considered as inimical to the two luminaries who discovered his trickery.

This partial eclipse is visible Australia, Africa, South America, most of Asia, and South/ East North America.  Those who reside in regions where the July 16, 2019 lunar eclipse is visible need to be vigilant about their activities. This is particularly so if you have planets natally placed in Uttara Ashadha (particularly your ascendant, Moon or Ketu) or are running a planetary cycle of Moon or Ketu. If the eclipse is not visible in your area, then just be mindful, but it’s fine partake in your normal activities.

Vedamurti Shri Vivekshastri Godbole has spoken about the power of eclipses. He is a 16th generation Brahmin and scholar who has imbibed the Vedic scriptures. “The eclipses affect our mind and and our physical body. The scriptures state that eclipses create financial or physical problems and sometimes new diseases. There can also be natural disasters around the time of an eclipse. This is why people should not look at the eclipse.”

These are especially for those residing in areas where the eclipse is visible.

Pregnant women, children, the elderly, and those with medical problems do not have to strictly adhere to the non-eating or drinking guidelines, but they should prioritize their health.

Mantras for the eclipse

The lunar eclipse is connoted with Lord Shiva, since he is depicted with a crescent Moon on his forehead. Vedamurti Shri Vivek Godbole has suggested that you can chant a Shiva mantra you are familiar with. Other chants which are powerful to perform during a lunar eclipse are the Chandi path (Durga Sapta Shlokhi), Shri Rudram, the Purusha Suktam, or the Guru Gita.

Since this eclipse coincides with Guru Purnima 2019, you may chant a mantra which your Guru has given you or devotionally chant the name of your Guru.

In Vedic astrology, or Jyotish, the Moon represents the manas or our emotional state.  Jyotish is a lunar based system. Metaphorically, our emotions may get clouded. With Mercury retrograde in Cancer with a debilitated Mars, our intellectual capacities may also not be performing at peak capacity. A primary reason why you shouldn’t gaze at eclipses is due to current world events. Wherever you reside, you’ve witnessed instability. There’s been political unrest, natural disasters, accidents, and horrendous crimes against humanity. These types of events get magnified near eclipses. They may not happen on the same day as the eclipse, but they set the stage for more problematic events.

We can harness the powerful energy of the eclipse and direct it towards something more noble and uplifting. Use the time to focus on peace, do a spiritual practice, chant a mantra, pray, do a visualization, or whatever resonates with you. Imagine the powerful energetic effect which could manifest if millions were focusing on peace at the same time.

However, if you still choose to look at the July 16, 2019 lunar eclipse or must be outdoors, please do so mindfully and safely. Focus on your internal state of mind rather than just the events in the sky. Connect to harmony and peace. Maintain your inner state, for the benefit of all.