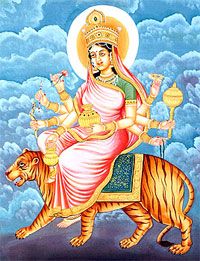 October 9th is the fourth night of Navratri 2021, for North America, Europe and India.  Navratri is nine nights celebrating the many forms of the goddess which Durga has taken. That is why the goddesses are known as NavaDurga (Nine Durgas).  Each goddess has particular aspects or qualities which we can embrace.  The women in Maharashtra and Gujarat states typically wear saris (traditional Indian dresses) to match the auspicious color for that night. There is also a planetary association with each of the nine goddesses.

One of the nava graha (nine planets) in Jyotish is for each NavDurga. On this day, the ruling planet is Jupiter (Guru).  According to Drik panchang, the auspicious sari color is grey. The website states: “Grey color represents balanced emotions and keeps the person down-to-earth. This color is also appropriate for those who want to participate in Navratri celebrations and make a subtle style statement with this undertone color shade.”

The fourth night of Navratri marks the 1st of the 3 nights dedicated to the worship of Shri Lakshmi, the goddess of prosperity, beauty and fortune.  On this night, NavaDurga we worship is the goddess Kushmanda (the creator of the universe).

The name Kushmanda is comprised of three syllables: ‘Ku’ (little), ‘Ushma’ (warmth or energy) and ‘Amnda’ (egg). This translates as “the one who created the universe as the “Little Cosmic Egg” with energy and warmth.” The Hindu scriptures state the universe was initially a dark place. Then, Kushmanda Devi produced the cosmic egg with her smile. Shri Vivek Godbole says this about Kushmanda:  She is like a fruit which resembles a white pumpkin or dudhi (squash in Gujarati). If you eat the Kushamanda (called khoda in Hindi) fruit, then you will have a lot of energy.  If you eat the Kushamanda (khoda in Hindi) fruit, you will have a lot of energy. That energy is like a warrior’s energy. People eat meat to get energy. This is not sattvic; it is rajasic.  Goddess Kushmanda provides you with a lot of strength and she gives you rajaya Lakshmi.  This is political strength. Additionally, if you have been under the influence of any kind of black magic or evil eye, she can remove those problems if you pray to her.

Drik panchang further elucidates on this goddess: Kushmanda is the Goddess who has the power and capability to live inside the Sun. The glow and radiance of her body is as luminous as that of the Sun. Goddess Kushmanda provides direction and energy to the Sun.  Goddess Kushmanda has eight hands and because of that she is also known as Ashtabhuja Devi (the goddess with 8 arms).  All the power to bestow Siddhis and Niddhis (spiritual prowess and wealth) are located in her japa mala (rosary beads).  It is stated that she created the whole universe, which is called Brahmanda (ब्रह्माण्ड) in Sanskrit, by just flashing little bit of her smile. gives the story of Kushmanda Devi: Lord Vishnu was able to start creating the universe when Maa Kushmanda smiled like a flower which blossomed with a bud. She created the world from nothing, at the time when there was eternal darkness. This swarup (form) of Maa Durga is the source of all. Since she created the universe, she is called Adiswarup and Adishakti.

She holds a kamandul (a water pot), a bow, an arrow, a pot of nectar (amrita), a discus, a mace, a mala, and a lotus.  She has a radiant face and golden body complexion. Maa resides in the core of the Sun and thus controls Surya Loka (the realm of the Sun).  Maa Kushmanda represents the anahata chakra (heart chakra) in spiritual practice. The divine blessings of Maa Kushmanda help you improve your health, fame, wealth, fortitude, and wealth. She removes all hurdles and troubles from your life and enables you to get rid of all sorts of sorrows in life. Maa brings light into darkness and establishes harmony in your life.

Devotees can worship Kushmanda Devi on the fourth night of Navratri by fasting or they can offer the Indian sweet Malpua as prasad.  She is also said to be pleased when you offer her pumpkins as prasad. Offer her jasmine flowers to invoke all five senses.

You may refer this useful table to determine the dates of each night of Navratri in your area, courtesy of mypanchang.com:

May Kushmanda Devi bless you on this fourth night of Navratri 2021!