The Third night of Navratri 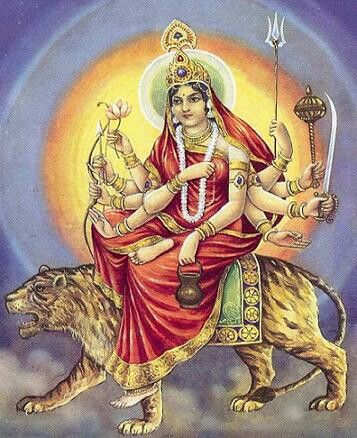 October 8th marks the third night of Navratri 2021 in North America and Europe   Navratri is nine nights celebrating the many forms of the goddess which Durga has taken. That is why the goddesses are known as NavDurga (Nine Durgas).  Each goddess has particular aspects or qualities which we can embrace.  The women in Maharashtra and Gujarat states typically wear saris (traditional Indian dresses) of a different color to go with the auspicious color for that day/ night. There is also a planetary association with each of the nine goddesses. One of the nava graha (nine planets) in Jyotish is for each NavaDurga.  The first three nights of Navratri are dedicated to Kali.

The NavDurga celebrated each night of Navratri is based on the phase of the Moon or tithi. In North America, the tithi at sunrise on October 8th is  Tritya (3rd).  So those in North America should worship Chandraghanta on the 8th.

For those in  India, due to the timing of different phases of the Moon, October 9th marks both the the 3rd and the 4th night of Navratri 2021.

You can look at the timing of the tithis on Drik Panchang. (Update the location to India to see Indian dates or it will default to your location).

Chandraghanta is the NavaDurga worshiped on the third night of Navratri.  Chandra means “Moon” and Ghanta means “bell”.  She’s depicted riding as a fierce 10 armed, three eyed, golden skinned goddess on a tigress, who is roaring in anger.  Chandraghanta has a half Moon on her forehead.  Chandraghanta eliminates all that is evil and wicked in the world. The scriptures state that there was a mighty battle between the demons and the gods.  The ringing of her bell killed many of the demons.

According to Drikpanchang, the auspicious sari color for the third night of Navratri is green.  They state that: “Green color symbolizes nature and evokes a sense of growth, fertility, peace and serenity. Wear Green on Friday and let the Goddess bestows you with tranquillity. Green also represents new beginnings in life.”

The governing planet for Goddess Chandraghanta is the Moon. Chandra means Moon.

Vedamurti Shri Vivek Godbole says: The Moon represents our mind in Vedic astrology, or Jyotish.  The Moon is fickle, as is the mind.  And the Moon is continually changing its form. The mind is always fluctuating as well; it is not firm.. Chandraghanta is ringing a bell and warming the mind to be cautious. She is commanding the mind, “Wake up. Don’t be fickle. Be stable.”She is always warning mind “This is not true path.”  Chandraghanta is like a GPS for the mind. Once the mind is stable, God is with you. The mind is a mediator. When the mind is not stable, then God is far away.  She is giving a lot of commands to the mind. The half-moon on her forehead looks like the bell (Ghanta) and because of that she is known as Chandra-Ghanta. She is depicted with ten hands. Goddess Chandraghanta carries a trishul (trident) Gada (mace), sword and kamandal  (water pot) in her four left hands. This goddess keeps the fifth left hand in Varada Mudra (hand gesture offering blessings). She carries a lotus flower, arrow, dhanush (bow), and japa mala in her four right hands and keeps the fifth right hand in abhaya mudra (fearlessness gesture).

This form of Goddess Parvati is peaceful and for welfare of her devotees. In this form, fierce Goddess Chandraghanta is ready for war with all her weapons. The sound of the moon-bell on her forehead is thought to expels all type of spirits or negative energies away from her devotees. By receiving Chandraghanta’s blessings, all obstacles, miseries, sorrows in the devotees’ lives are removed.

GaneshaSpeaks.com says:  A symbol of peace, serenity and prosperity. She establishes justice and gives her devotees the courage and strength to fight challenges.  Her appearance may be of a source of power which is always busy killing and suppressing the bad and wicked. However, for her devotees, Maa is serene, gentle and peaceful. By worshiping Maa Chrandraghanta, you will open the doors to great respect, fame and glory. Maa also helps you attain spiritual enlightenment. Her idol, which symbolizes both beauty and bravery, gives you the strength to keep the negative energy away and repels all the troubles from your life. You need to follow simple rituals to worship Goddess Chandraghanta. You should first worship all the Gods, Goddesses and planets in the kalash.  Then offer prayers to Lord Ganesha, Kartikeya, Goddess Saraswati, Lakshmi, Vijaya, and Jaya – the family members of Goddess Durga. The puja should be concluded by worshiping Goddess Chandraghanta, followed by a heartfelt prayer to Lord Shiva and Lord Brahma.

Goddess Durga is said to descend from heaven during Navratri to bless her devotees. One way to propitiate her is to offer the food or prasad (blessed offerings) preferred by each of the NavDurga. For Chandraghanta, you can offer any type of sweets, or milk in a silver cup, or kheer (rice milk with spices and nuts).

Here is a very helpful table to determine the dates of Navratri in your region, courtesy of mypanchang.com

May Chandraghanta bless you on the third night of Navratri 2021!