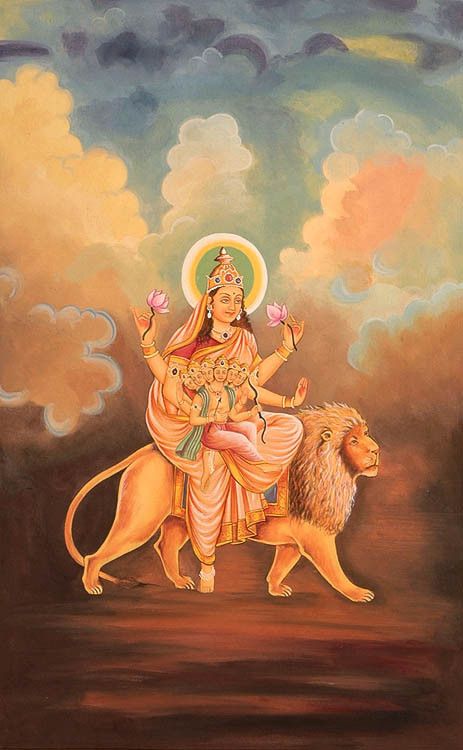 October 10th is the fifth night of Navratri 2021 in North America, Europe and India.  Navratri is nine nights celebrating the many forms of the goddess which Durga has taken. Thus, the goddesses are known as NavaDurga (nine Durgas).  Each goddess has particular aspects or qualities which we can embrace.  The women in Maharashtra and Gujarat states typically wear saris (traditional Indian clothing) to match the auspicious color for that night.  Additionally, one of the nava graha (nine planets) in Jyotish is associated with each NavDurga.

The NavaDurga worshiped on the fifth night of Navratri is Skandamata (the mother of  Skanda Kumar or Lord Kartikeya – the celestial warrior).  Skanda was Ganesha’s brother.  The governing planet is Mars (Mangal).  The auspicious sari color is orange, according to drikpanchang. The website states: “Worshipping Goddess Navdurga wearing Orange color on Sunday bestows the person with qualities such as warmth and exuberance. This color is full of positive energy and keeps the person upbeat.”  Offer yellow roses to Skandamata. They are thought to strengthen your relationship with children.

Skandamata is usually depicted riding on a lion.  One hand is in abhaya mudra (fearlessness pose).  Devi Skandmata holds six-headed Skanda in his infant form on her lap and a lotus in her right hand. Devi Skandmata has four arms, three eyes, along with a bright complexion.   Devi Skandamata is the daughter of Himalaya.  She is also worshiped in the form of Parvati, Maheshwari, or Mata Gauri.  She is also called as Padmasani since she is often depicted seated on a lotus flower (padma). Worshipping her is said to give blessings of peace and purpose and to relieve anxieties. In Vedic astrology or Jyotish, Kartikeya is associated with the nakshatra (constellation) of Krittika. Krittika is known for seeking security and providing protection.  If you have planets placed in Krittika in your birth chart, you may benefit by propitiating her. North node Rahu is currently transiting Kritikka nakshatra in Vedic astrology or Jyotish, so if you are in a Rahu cycle (daha or bhukti), you may wish to chant a mantra for Krittika nakshatra as well. (The South Indian spelling is Krithika.)

Shri Vivek Godbole explains: “Every mother should think, “I would like to have a child like Kartikeya who leads. I want good leader who can control a whole army if necessary. I want a strong and powerful child.”  If every mother prays to Skandamata, then she will have a very good, strong, and honest child.  The child will not lie.  If all mothers pray to her, then the world will become punctual and straightforward. Skandamata grants fine children as well as good fertility. People blame the army but they don’t want to work. They want luxury and prefer for others to fight. Skandamata says every person should have bravery and be a soldier in their own way. If every person is strong, then no one can conquer a country. Everyone will fear that country. When we pray to Skandamata, the children in your country will be brave and courageous and not cowards.” “The fifth night of Navratri is also known as Lalita Panchami. The worship of a crystal Shri Yantra and Shri Vidya are done. Shri Yantra takes the form of the chakras in our body. There are six chakras in Shri Yantra. It is worshiped by people who want to attain God. The deity of the Shri Yantra is the goddess Lalita. To attain Guru krupa (Guru’s grace) and to attain inner peace, chant the Lalita Sahasranam (1,000 names to the goddess Lalita) or the Lalita Trishati  (300 names).  When Lalita appears in warrior form, she is Khargamala. Offer her 48 bunches of durva grass to attain knowledge.”

Ganeshaspeaks explains:  The left arm of the goddess is in a pose to grant boons with grace to her devotees.  The legend says that the demon Tarkasura once pleased Lord Brahma with his great devotion and extremely tough penance. He asked Lord Brahma to shower his blessings and make him immortal. Lord Brahma denied Taraksura this blessing, saying that none can escape death. Tarkasura shrewdly asked to be killed by the son of Lord Shiva, since he thought Lord Shiva would never marry. Tarkasura started tormenting mankind. Fearing that his strength would cause destruction, the  Gods asked Lord Shiva to get married. He agreed and married Goddess Parvati.  Their child, Lord Kartikeya (Skanda Kumar) demolished Tarkasura. Devi Skandmata is a symbol of the mother-son relationship.  By worshiping her, you get immense love and affection from her and all your desires fulfilled. You may attain supreme joy even in this very mortal world. Her worship automatically includes the worship of Lord Kartikeya (in his child form). Offer Skandamata her preferred prasad of bananas. It will bring you her blessings as well as good health.

Here’s a very useful table from mypanchang.com, to guide you for the nights of Navratri 2021 in your area:

May Skandamata and Kartikeya bless you on the fifth night of Navratri 2021!