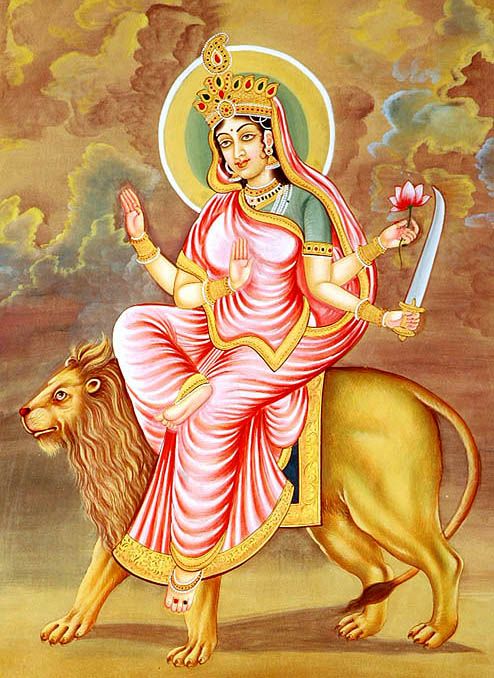 October 11th is the sixth night of Navratri 2021 in North America, South America, India, Europe and Australia.  Navratri is the nine night festival honoring the many forms which the goddess Durga has taken.  Thus, the goddesses are known as NavaDurga (nine Durgas).  Each goddess represents particular virtues and attributes which we can embrace. Katyayani is the NavDurga worshiped on the sixth night of Navratri.  The women in the states of Gujarat and Maharashtra wear saris (traditional Indian clothing) to match the auspicious color for the goddess that day.

Additionally, one of the navagraha (nine planets) in Jyotish is associated with each NavaDurga.  This is the last of three nights dedicated to honoring Shri Lakshmi.  The phase of the Moon in Vedic astrology is shasti.  Tonight, the auspicious sari color is white, according to Drik Panchang.  The website states: “White color is synonymous with purity and innocence. Wear white color on Monday to become worthy of Goddess’ blessings and experience a feeling of inner peace and security.”

Residents of New Zealand and Fiji will celebrate the sixth night of Navratri on October 12th.

Vedamurti Shri Vivek Godbole speaks of the significance of goddess Katyayani ( कात्यायनी): “In the Bhagvad Gita, it says to perform a Katyayani vrata (vow or religious practice) to find a proper partner. When girls are young, they do a Katyayani vrata. There is a story about some young girls who came to take bath at the Yamuna River. They were praying to Katyayani to find a good husband while they were bathing. Shri Krishna took their clothes and placed them near a kadama tree.  The girls urged him to return their clothes. Krishna said to them, “You are all great beings. But you are taking a bath naked. Don’t bathe naked in public, but wear clothes. Katyayani will bless you.”  Krishna provided them with knowledge. Both males and females can pray to Katyayani to attain a proper spouse.” You can also listen to the Mahishasura Mardini Stotram today to propitiate Katayani Devi.

The Vamana Purana describes the birth of Katyayini Mata. The Devi Purana further elucidates her glory.

Ganeshaspeaks provides this explanation of Katyayani’s birth: Once there was a great sage or rishi named Katya and it was his wish that Maa Durga be born as his daughter. He practiced austere penance for several years to please the Gods. The trinity of Gods (Brahma, Vishnu and Shiva) got involved and they designed Goddess Durga, who possessed the abilities of all deities. Since she was born to sage Katya, she was called Katyayani.  Maa Katyayani has 3 eyes and 4 hands.  If you make a vow of fasting and worshiping her, she will bless you with the husband you have wished and prayed for. If a lady’s marriage is getting delayed for any reason, she may worship Maa Katyayani to remove obstacles that may be causing delays in her marriage.  Maa also blesses you with better health and wealth. By worshiping Maa Katyayani, you may develop great strength to fight all disease, sorrows, and fears. In order to destruct the sins accumulated over your several lives, you should religiously worship Maa Katyayani.

Other sources also say that you should worship Katyayini if you have  numerous opponents who are creating obstacles for you without any fault on your part.  She will rescue you if you worship her with full faith and devotion. Worshippers can offer raw honey as prasad  or bhog to Goddess Katyayani. Her blessings will fill their lives with sweetness and help them overcome any troubles.

A bija mantra for her is: OM KROM KATYAYANI NAMAH.

You can also use a yantra for Katyayani to focus on her energy.

Here is very useful guide from mypanchang.com to guide you through the 9 nights of Navratri 2021 in your area:

May Katyayani protect and bless you on this sixth night of Navratri 2021.