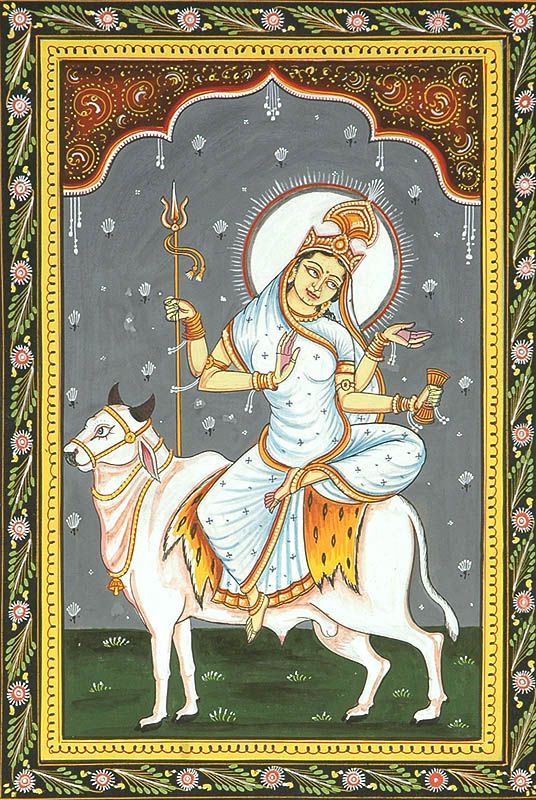 The festival of Navratri 2020 began on October 17th worldwide. It is based on the phases on the Moon.

Navratri is the nine night Indian festival honoring the many forms which the goddess Durga has taken.  Thus, the goddesses are known as NavaDurga (nine Durgas).  Each goddess represents particular virtues and attributes which we can embrace.  The women in the states of Gujarat and Maharashtra wear saris (traditional Indian clothing) to match the auspicious color for the goddess that day. Additionally, one of the nava graha (nine planets) in Jyotish is associated with each NavDurga.  This is the second of three nights dedicated to honoring Saraswati.

The eighth night of Navratri is called Durgashtami.  Ashtami is the 8th phase (tithi) of the Moon in Vedic astrology.

This year, there are 8 actual nights of Navratri rather than 9, due to the timings of when the tithis change.

While October 23rd is technically the 7th night of Navratri 2020, the term Ashtami tells us that it is the 8th night of the Navratri Festival in all locations.

It is also known as Mahashtami. Durgashtami celebrates the victory of Durga over the buffalo demon Maheshasura.  Maheshasura did great austerities and as a result, Lord Brahma agreed to grant him a boon. He first asked for but was denied that. Then he asked that he could only be killed by a woman, as he thought that no woman would be strong enough to overpower him. This now made him immune to being killed by Brahma, Vishnu, and Shiva. So he set out to destroy the earth. Then he wanted to destroy Devaloka – the abode of the gods.  The gods were worried and they approached goddess Durga. Durga emerged as Bhadra Kali and slew him.

Maheshasura is an embodiment of tamo guna – the qualities of heaviness, lethargy, and ignorance. Durga is the embodiment of dharma or right action. She acts for noble purposes. The Devi Bhagavatam tells the story of how Maheshasura incarnated on the earth.  The chant Aigiri Nandini – Maheshasura Mardini also relates this tale and is chanted on Durgashtami.

Mahagauri (“very fair”) is the NavaDurga whom we worship on Durgashtami.  The auspicious sari color is peacock green, according to Drik panchang.  The governing planet is Rahu (the North node of the Moon).

Residents of North America, Asia, and Europe should all worship Mahagauri on this night.

You should offer coconut as prasad (blessed food) to Mahagauri. It is widely believed that donating coconuts to the Brahmans on Ashtami, blesses a childless couple with a child.

Vedamurti  Shri Vivek Godbole says this about Mahagauri:  “She is beautiful, very fair, and adorned with many ornaments. Her sari is also very precious. Women dance in front of her by performing dandia raas or garba (traditional Indian dances during Navratri, especially in Gujarat and Maharashtra).  While dancing, they think that goddess Durga is dancing with me. When you pray to Mahagauri, she will make you beautiful in her beauty parlor. She is a beautician.” tells this story: According to Hindu mythologies, the Goddess Shailaputri at the age of sixteen was extremely beautiful and was blessed with a fair complexion. Due to her extremely fair complexion, she was known as Goddess Mahagauri (महागौरी).

The mount of Goddess Mahagauri as well as Goddess Shailaputri is a bull.  Because of that she is also known as Vrisharudha (वृषारूढ़ा). Goddess Mahagauri is depicted with four hands. She carries a trishul (trident)  in one right hand and keeps the second right hand in abhaya mudra (fearlessness poses).  She carries a damaru (a two-headed drum) in one left hand and keeps the second left hand in varada mudra (offering blessings).

Due to her fair complexion Goddess Mahagauri is compared with the conch, the Moon, and the white flower of kunda (कुंद).  She adorns white clothes only and due to that she is also known as Shwetambardha. says of Mahagauri: The legend has it that Maa Mahagauri liberated the world from evil forces. She has three eyes and four hands. Radiant and compassionate, Maa Maugauri is usually depicted in a white or green sari and riding a bull.  Maa Mahagauri purifies the souls of her devotees and removes all their sins. She has a calming effect on the lives of her devotees and she also helps them improve their knowledge. Worship Maa Mahagauri to be free from the clutches of the material world and to remove sorrows from your life, for she will lead you to the path of virtue and inner power.

Here is  a stuti to Mahagauri:

May Mahagauri bless you on the eighth night of Navratri 2020. Shubh Durgashtami!