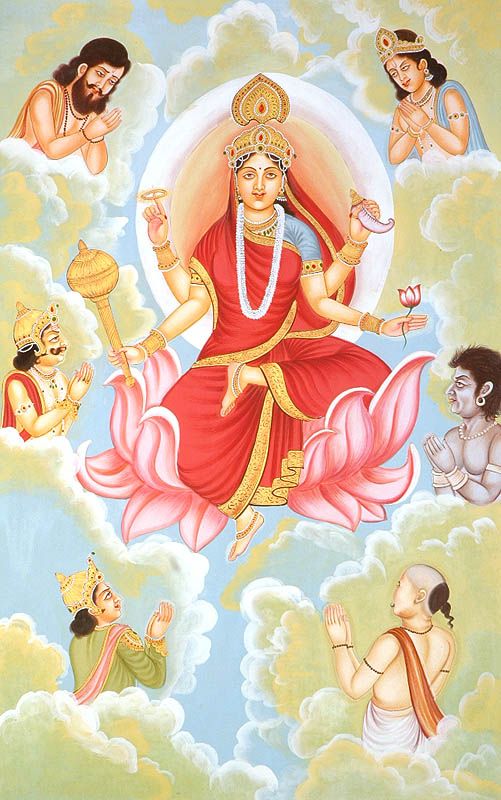 Wednesday, October 13th is the ninth night of Navratri 2021 in most of North America, all of Europe and South Africa.  Navratri is the nine night festival honoring the many forms which the goddess Durga has taken.  Thus, the goddesses are known as NavaDurga (nine Durgas).  Each goddess represents particular virtues and attributes which we can embrace.  The women in the states of Gujarat and Maharashtra wear saris (traditional Indian clothing) to match the auspicious color for the goddess that day.

Additionally, one of the nava graha (nine planets) in Jyotish is associated with each NavaDurga.  This is the last of three nights dedicated to honoring Saraswati. It is also the conclusion of the festival of Navratri.

The last or ninth night of Navratri is known as Maha Navami.  Maha means great and Navami refers to the ninth phase of the Moon in Vedic astrology.  The NavaDurga whom we worship on the ninth night of Navratri is Siddhidatri  (सिद्धिदात्री).  The auspicious sari color is pink, according to Drik panchang.  The website states: “Wear Pink color on this day of Navratri celebrations. Pink symbolizes universal love, affection and harmony. It is an attractive color, makes the person approachable and simultaneously adds oodles of charm to one’s personality.” The governing planet is Ketu (the South node of the Moon).

October 13th is technically the 8th day of Navaratri 2021 in North America.   However, we are paying attention to the phase of the Moon (the tithi) during night time to determine which night it is and which goddess to worship.  For residents of (most of) North America, Europe and Africa,  Durgashtami and Maha Navami are both on October 13th. They should worship both Mahagauri and Siddhidatri. These calculations are provided by mypanchang.com

Residents of Hawaii and the Pacific time zone (West coast) will celebrate Durgashtami along with Saptami on October 12th.

To honor Siddhidatri, you should observe a fast and offer til or sesame seeds as prasad (blessed food) to her. This is believed to protect their family from unfortunate mishaps.  You can later use the sesame seeds in your cooking.

Many people choose to fast on Maha Navami. You may eat only fruits and nuts, or you may only have one main meal after sunset, or you may have only fruits, nuts and root vegetables.

You may offer her the champa flower (Plumeria Alba) Vedamurti Shri Vivek Godbole says: “A siddhi is mistakenly thought of as magic and people want siddhis to walk over water or to fly. Eknath Maharaj says these are substitutes. You will never find God, but you will be deceived by these siddhis. Siddhidatri will open your eyes.  She will show you what a siddhi is;  what is true and what is not true.”

“She is asking, “I gave you a beautiful form, mind, how are you using it? You should use everything properly.” She will control your use of what you have. “ We can speak, sing and express joy. We can express our thoughts with each other. Other forms can’t do that.  Siddhidatri is saying, “I have given you innumerable gifts but you are crying like a beggar. You think, ‘I don’t have this, I don’t have that.’ Think of what you have and then cry.”  She will tell you what you have to think about that. Then you can ask for other things.” Drik panchang explains: In the beginning of the universe, Lord Rudra worshiped Adi-Parashakti for creation. It is believed that Goddess Adi-Parashakti had no form. The supreme Goddess of Power, Adi-Parashakti, appeared in the form of Siddhidatri from the left half of Lord Shiva.  Goddess Siddhidatri sits on a kamal (lotus)  and rides on the lion. She is depicted with four hands. She has gada (mace) in the one right hand, chakra (discus) in the other right hand, lotus flower in the one left hand and shankha (conch) in the other left hand.

She is the Goddess who possesses and bestows all type of siddhis to her devotees. Even Lord Shiva got all his siddhis by the grace of Goddess Siddhidatri. She is worshiped by not only humans, but also by Devas, Gandharvas, Asuras, Yakshas and Siddhas. Lord Shiva got the title of Ardha-Narishwar when Goddess Siddhidatri appeared from his left half.

Ganeshaspeaks writes: Maa Siddhidatri grants her devotees all sorts of achievements and is capable of giving all sorts of occult powers. She is the possessor of 26 different wishes (siddhis) which she grants her worshipers. The legend has it that the Lord Shiva got all those siddhis by worshiping Maa Shakti.  As a result of her gratitude, half of Lord Shiva’s body became that of Maa Shakti, and therefore he was called as Ardhnarishvar. This avatar of Maa Durga removes ignorance and provides knowledge to her devotees.  Her glory and power are infinite and worshiping Maa Siddhidatri on the final day (the ninth day) of Navratri bestows all siddhis to her devotees and also marks the successful completion of the Navratri festival.

It is said that all wishes get fulfilled by her blessings. Siddhidatri gives her devotees a positive outlook and the energy to carry out their goals.

Here is a stuti to Siddhidhatri:

Here is a useful reference guide, courtesy of mypanchang.com, to help you track the nights of Navratri 2021:

May Siddhidhatri bless you on this ninth night of Navratri 2021.  Shubh Navrati!