Mars and Saturn in Sagittarius – A Battle Ensues 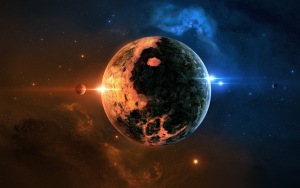 Mars joined Saturn in Sagittarius on March 7.  Now, they are drawing into very close proximity. This is one of the most significant events in Vedic astrology, or Jyotish, for 2018.  As the two great malefics in Vedic astrology, Mars and Saturn in Sagittarius together is akin to driving with one foot on the gas and one foot on the brakes simultaneously. With Mars and Saturn, fire and ice collide. Historically, Mars and Saturn together have produced global conflict, political tension, and natural disasters.

The stage is set for the biggest battle of the year in Vedic astrology, or Jyotish – a Mars Saturn conjunction in Sagittarius.  In Jyotish, we call this alignment a graha yuddha or a planetary war.   A planetary war occurs when two planets are within one astronomical degree of each other.

Mars (or Mangal) is the hot planet of aggression, ambition, competition, action, and conflict.  Saturn (or Shani) is the cold planet of obstruction, challenges, delays, discipline, responsibility, and adversity.  Mars represents your siblings and Saturn denotes your subordinates.

Mars (Mangal) and Saturn (Shani) are incompatible roommates who both want things “my way or the highway”.  Neither wants to budge and both feel they are right.  Mars likes to be daring; Saturn is cautious.  Mars needs to be in charge.  Saturn shuns being told what to do. Saturn is slow, strategic and seeks safety.

Mars and Saturn in Sagittarius create a determination to get things done.  There’s a drive to accomplish things on your time frame and only as you see fit.  This can literally wear you and others out trying to meet the deadline of having it done “by yesterday”.  The result could be long-term health problems.

Symbolically, Mars represents the armed forces, police, militia, and those who are “bearing arms”.  Thus, it can personify people in places of power.  Mars is aggressive in nature. “The red planet” often acts without thinking when passionate emotions arise.  Saturn can signify people who are in service-oriented positions or those of lower socio-economic classes.  Saturn is mythologically depicted as dark hued, thus representing people of color, as well as foreigners.  We’ve witnessed conflict escalate over the last few weeks about gun control and the gun laws.

THE BATTLEFIELD OF SAGITTARIUS

Sagittarius is an active, fire sign.  Sagittarius is motivated by dharma, or right action.  However, what one thinks is “right action” may have difficult consequences for others.  The symbol is an archer and his bow. Thus, there is methodical and focused activity.

Mars and Saturn are both “bhumy karakas” or significators of  “earthy” matters and property, so these could be adversely impacted as the planets grow closer.

Additionally, Mars and Saturn signify technology.  Technology issues were exhibited via the heightened challenges which have been revealed with Facebook’s privacy issues as well as Under Armour’s security breach.  We have the conflict of safety and security vs. the aggressive use of information.

As Mars and Saturn represent the blood and muscle tissue, respectively, in Ayurveda, you’ll feel a greater urge to be active. Be careful of injuries which can result from recklessness. Pushing yourself relentlessly can push Pitta (Mars) and Vata (Saturn) out of balance.  Use Ayurvedic tonics to support the circulatory system and to ease fatigued muscles.

STRATEGIES TO HANDLE MARS AND SATURN IN SAGITTARIUS:

TIMING OF THE PLANETARY WAR Astronomically, Mars “wins” the war due to its magnitude, but as my Jyotish teacher is fond of saying, “Both parties in a war are bloodied”.   Protests and uprising are likely to spring up again, so be cautious as you exercise your free will.  Mars leaves Sagittarius on May 2. Saturn will soon turn retrograde in Sagittarius.

On an individual level, those in a Mars or Saturn planetary cycle will be most impacted.  You also want to consider what house of the zodiac Sagittarius represents in your Vedic astrology chart. This can be a very intense period.  If we better understand what is happening astrologically on both a personal and global level, then we are empowered to be more discerning, follow our highest dharma, and have greater empathy.  We always have free will to choose wisely, to select where we put our focus, what we say, and how we act.

UPDATE – APRIL 1 – for links to articles to illustrate how Mars and Saturn together are playing out – please visit my Facebook page.