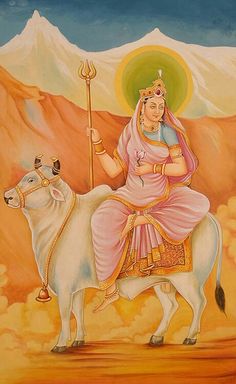 October 17th is the first night of Navratri 2020 worldwide.  Navratri is 9 nights celebrating the many forms of the goddess which Durga has taken. That is why the goddesses are known as Nava Durga (9 Durgas). Each goddess or NavDurga has particular aspects or qualities which we can embrace.  The women in Maharasthra and Gujarat states typically wear saris (traditional Indian dresses) of a different color to go with the auspicious color for that day/ night. There is also a planetary association with each of the nine goddesses. One of the nava graha (9 planets) is for each Nava Durga.  The first 3 nights of Navratri are dedicated to Kali.

Shaila means mountain. Putri means daughter. According to the ancient text, the Shiva Purana, Shailapurtri was previously born as Parvati. Himavan’s daughter is Paravati (“Mother Earth”).  She is known also as Hemavati, Sati, and Bhavani.  Sati was angry at her father for not honoring her husband, Lord Shiva, so she threw herself onto a funeral pyre. She was reborn as Parvati.  Parvati performed many austerities to attain Lord Shiva. The couple eventually reunited and married. Parvati was the mother of Ganesha and Kartikeya.

Shailaputri is depicted riding Nandi the bull and carrying a trident (trishula – also associated with Shiva) in her right hand and a lotus flower (a symbol of purity) in her left. On her forehead is the crescent Moon. She is the goddess of nature and compassionately guards all living organisms.

Shailaputri is associated with the muladhara chakra (the root chakra).  The governing planet for Shailaputri is the Moon.  Drik Panchang says: It is believed that the Moon, the provider of all fortunes, is governed by Goddess Shailaputri and any bad effect of the Moon can be overcome by worshiping this form of Adi Shakti.

The goddess Durga is said to descend to earth during Navratri and take on one of her NavDurga avatars. Set up an altar in the Northeast corner of your home. (For those in India or familiar with these rituals – Kalash Sthapana is done.) Offer her flowers (to match the color of the day), incense, water, and prasad. To properly worship her, you may offer the prasad (blessed food) that is specific to each Devi. For Shailaputri, the prasad is ghee (clarified butter).  Offering ghee is said to keep the worshiper free from illness and disease. In Ayurveda, ghee is said to be one of the three best carriers of nutrients into the body. 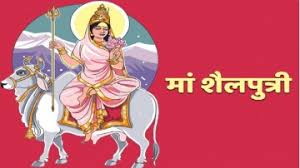 Vedamurti Shri Vivek Godbole says this about Shailaputri:
She performed many austerities to attain the right husband and after so, she found Lord Shiva.  She teaches us to make effort to achieve our goals. Don’t be tired, but continue and go towards your aim forever. if you don’t have food or water, don’t worry. Follow your path.  Perform austerities. When doing your sadhana, be silent.  Think only about your master, guru, your goal, or the goddess.  Shailaputri teaches us how to be a good seeker.

This is the mantra for Shailaputri for the first night of Navratri: