The festival of lights 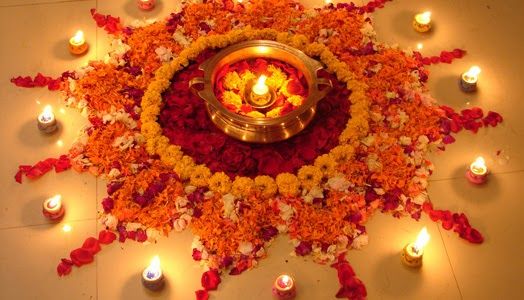 Diwali is a five day festival in India. It begins with Govatsa Dwadashi, then Dhanteras, followed by Kali Chaudas or Naraka Chaturdashi, and then the night of Diwali itself. Diwali or Deepavali / Deepawali is the Indian festival of lights. “Deepa” means light and “avali” means a continuous line. Diwali occurs just before the Indian New Year.  Diwali 2018 will be celebrated on different days in various parts of the world.  Since Vedic astrology or Jyotish is a lunar based system, it calculates holidays based on phases of the Moon.  According to mypanchang.com, Diwali 2018 falls on November 6 in North America and South America. However, India and the rest of the world will celebrate Diwali 2018 on November 7.

As explained on mypanchang.com, the new Moon (amavasya) has to prevail for over 2 hours after sunset to celebrate Diwali and perform Lakshmi puja.  This will only occur in North and South America on November 6.  Many Hindu temples in North America will just consult the Indian calendar and not take the time difference into consideration.

Following Diwali is Govardhan Puja. It is on November 7 in North America and the West Indes. The rest of the world will celebrate on November 8.

Indian new year 2018 is on November 8 worldwide (except Hawaii, where it is the 7th). This is the Gujarati and Marwadi New Year. Other parts of India celebrate the new year at different times of the year, according to their own traditions.

The final holiday in the festival of Diwali is Bhai Beej (also called Bhaiya Dooj or Bhai Duj). This celebrates the bond of brothers and sisters. This year, it coincides with the Gujarati New Year in North and South America by falling on November 8. Elsewhere, Bhai Beej 2018 will be on November 9.

Diwali celebrates Lord Rama’s return back home after a 14 year period of exile. He was living in the forest with his brother Lakshman, wife Sita, and faithful servant, Hanuman.  The residents of Ayodhya (I-yo-the-yah) celebrated his homecoming by lighting rows and rows of lights, or diyas, and waving sparklers. Rama symbolizes the path of righteousness or dharma.  His return is a metaphor for the victory of good over evil.  He performed his duty, stayed true to his path, and triumphantly returned home. Indians celebrate Diwali by wearing colorful, new clothes and honoring the goddess Lakshmi (luck-shmee), the goddess of prosperity, fortune, and beauty.  Their homes are brightly lit with clay diyas. Some also regard Diwali as the day on which Lakshmi and Vishnu were married.  Homes are cleaned from top to bottom so that Lakshmi can grace the home with her presence. Pujas (ritual worship) to Lakshmi are traditionally performed on Diwali.  People feast on a sumptuous variety of sweets made from ingredients such as brown sugar, jaggery, strands of saffron, along with ghee (clarified butter), as well as cardamom, powdered cinnamon, nuts, and rose water.  For the auspicious times for Lakshmi puja in your area, visit the DrikPanchang website and select your location on the map.

Shri Vivekshatri Godbole of the Shri Krishna Yajurveda Pathashala in Maharshatra, India had this to say about Diwali: “The darkness of the demon is gone and there is light.  Rama and Krishna are avatars or forms of  Lord Vishnu. For Lakshmi puja, we worship Lakshmi and Kubera. Kubera is the treasurer of the Vedic gods and goddesses.  One of Vishnu’s names is Kubera.  Kubera is the step brother of  Ravana. His kingdom was (Sri) Lanka. When Ravana became strong, he defeated Kubera.  Afterwards, Kubera went North.”  Similarly, in Vaastu Shatra, the Northern direction is associated with Kubera and prosperity. “Kubera is the deity who owns gold, diamonds, and precious things.  People should clean their homes for Diwali. For Lakshmi puja, they can worship their money, jewelry, bank books, and credit cards. They can chant the Maha Lakshmi Stotram (Ashtakam) 15 times. There is also a small stotram for Vishnu called the Govinda Ashtakam.” Further information on Diwali 2018 will be posted on my Facebook page.  To learn more about Lakshmi, you may participate in a course offered by Shruti Gandha in the (Indian) new year.

Diwali marks the celebration of light over darkness, as Rama was victorious in defeating the demon Ravana prior to his return to Ayodhya.  As such, it is also a time when we can honor our own inner light and let it shine forth into the world. It is one of the most auspicious days of the year.